Paragon Foods, a major distributor of specialty foods to the restaurant and food service industries, was near the end of its three-year build at their new distribution center when Surface Technology, Inc. President Michael Greenblatt fielded an inquiry: “Can you install a General Polymers FasTop 12S urethane slurry flooring system at our 10,000-square-foot ‘Just Cut’ Room in seven days between Christmas and New Year’s Day?”

Fortunately, Greenblatt’s crew had plenty of experience with General Polymers’ FasTop 12S. The urethane slurry can be applied directly to abrasive-blasted concrete, saving time over systems that require a primer. In addition, it cures and hardens very rapidly — a major factor in determining this project’s viability. 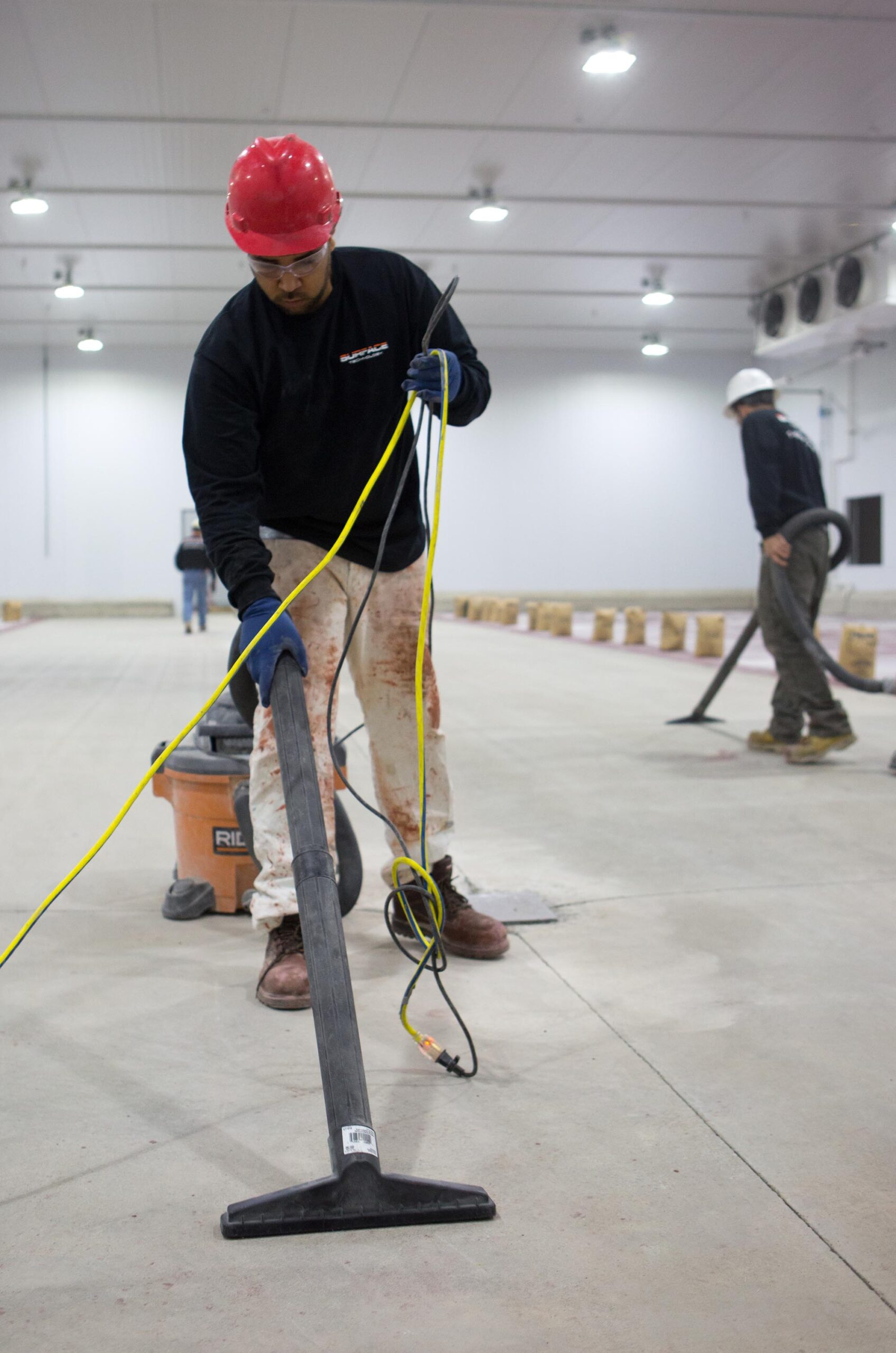 Surface Technology, Inc. – a licensed, deadline-focused, national epoxy flooring contractor with more than 30 years’ expertise in installing flooring systems on industrial concrete surfaces – is typically booked solid during that period. “Between Christmas and New Year’s is a popular time for plant shutdowns, so we typically work for existing customers,” said Greenblatt. Still, the prospect of cultivating a brand-new client was a big temptation.

The day after Christmas, STI’s six-man crew loaded and hitched two 24-foot job trailers and made the five-hour trek to Paragon Foods. They rolled their gear and product about 500 feet to the staging area, upon which they had placed cardboard for protection. Thankfully, during this between-holidays project, there were only a few other tradesmen to work around.

“This was going to be a hustle from day one to day seven — bell to bell,” said Greenblatt. “If there had been a bunch of other trades on site, it would have been hard to make deadline.”

With the stage set, two crewmen worked with their Blastrac 14D walk-behind shot blaster to pepper the concrete with Aramsco S-390 steel shot to achieve NACE No. 6/Society for Protective Coatings (SSPC) Surface Preparation (SP) 13: Surface Prep of Concrete standard. Others used DeWalt 4- and 7-inch angle grinders to prep edges and doorways. Working on hands and knees, the crew also wielded hammers and chisels to create 45-degree tapers (called chases) around floor drains so the slurry would trowel f lush to the drain collars. On larger drains and long stretches of trench drains, the men used a Bosch 11316EVS chipping hammer to create chases.

“FasTop 12S cures and hardens very quickly,” said Greenblatt. “This requires at least six, experienced epoxy flooring professionals – not simply commercial painters.” Surface Technology, Inc.’s highly skilled epoxy techs average more than 20 years of experience installing resinous floor systems – the highest in the industry. “Our large crew of epoxy professionals knew exactly how to mix it up, pull it out with a pin rake, trowel it down, backroll with a looped roller, and tie into your previous batch within 10 to 15 minutes max. Once you start, you can’t stop. It’s a continuous production that requires a good-sized, experienced crew,” Greenblatt stated. 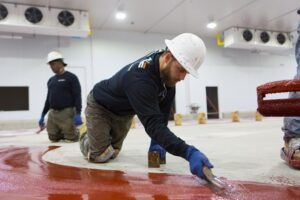 To keep this project on track, the Surface Technology crew divided the Just Cut Room into two pours. That meant running a cold seam down the middle. How did they hide it? “Well, the first thing you want to do is make the seam razor straight,” said Greenblatt. “That helps it look finished when all is said and done. You pour right up to the cold seam, and since the slurry is low VOC [volatile organic compounds], you don’t need to worry about shrinkage creating a height difference. We always go back and stone down (with 20-grit concrete rub brick) any imperfections left behind after the slurry cures. Once the colored seal coat is added, an untrained eye can’t see the seam at all.”

As soon as the topcoat cured, the STI crew switched gears to installing a cove base around the perimeter of the Just Cut Room. Cove bases redirect water from walls to deck drains, prevent bacterial growth in floor/wall joints, and help protect walls from damage by carts, hand trucks, and the like. 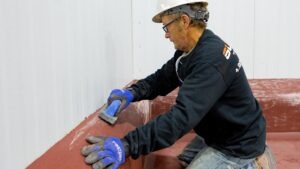 Installing cove bases is as much of an art as it is a trade. With the deadline drawing near, Greenblatt relied on his project leader Roland King. “It’s not easy to make cove bases look that nice,” said Greenblatt. “But Roland’s been with Surface Technology, Inc. for more than 20 years and did an outstanding job on the cove bases and floors,” he said.

After stoning down ridges in the preexisting concrete cove base substrate, King and his crew brush applied a single coat of General Polymers GP3477 epoxy primer at 2‒4.5 mils approximate DFT. The recoat window is two to five hours at 4.5 mils at 73 °F on average. While waiting for the primer to cure, the men began mixing FasTop Cove Base System. Again, using premeasured kits, the crew first mixed (about one minute) a unit of GP 4060A before adding a unit of 4060B. After blending, the men slowly added the red pigmented aggregate blend until they created a thick mixture capable of clinging to vertical surfaces. 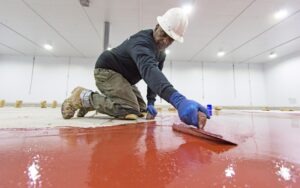 “We pride ourselves on trying to get as close to perfection as possible,” Greenblatt said. “This project came out beautifully, and we walked away with a zero punch list.”

Greenblatt is extremely confident that the FasTop system will withstand years of heavy wear associated with commercial food processing areas. “Most epoxies will withstand temperatures up to about 150 °F, but FasTop 12S is rated to 300 °F [148.9 °C],” he said. “That’s important in food service where floors can receive thermal shock due to boiling hot water poured down drains, hot water scrubbing, or steam cleaning.” 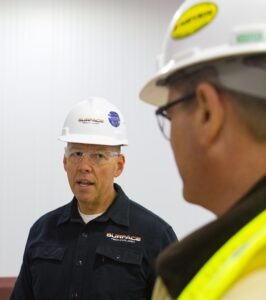 Paragon’s VP of operations Rich Mosgrove compliments STI on working efficiently over the holidays to help keep this important construction project on track. “They were in and out quickly, did a great job, and the new floor is performing great,” said Mosgrove. “In fact, I just had an argument with the manager back there. He wanted to drill some holes in the floor to mount equipment, and I won’t let him. I want to keep the floor new, looking good, and free of entry points for potential problems.”

JOB AT A GLANCE

SIZE OF CREW: A 6-person crew worked this project